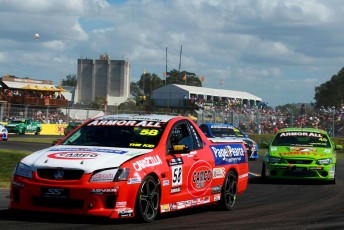 V8 Utes will return to Townsville next year, seen above, as well as visit other spectacular events in both Australia and New Zealand

A trip across the Tasman will highlight the 10th anniversary season of the popular Yokohama V8 Utes category in 2010.

The calendar, displayed below, will be held exclusively at V8 Supercar events and will kick-off on the streets of Adelaide at the Clipsal 500 in March.

The second event of the season will be a non-points event at the ITM 400 in Hamilton, with the eight other events on the schedule all for championship points.

The category’s return to Surfers Paradise is also to be confirmed, all part of a calendar that visits some of the marquee events of the year in Adelaide, Darwin, Townsville, Phillip Island, Bathurst and Homebush.

“We are extremely happy with the calendar and grateful to V8 Supercars for their continued support,” said V8 Ute Category Manager Bill West.

“I think it shows how far the V8 Utes have come as a category and it’s great to know we are welcome back to our favourite tracks.

“We wish we could go all over Australia but unfortunately with only eight rounds we can’t be everywhere and this calendar reflects the Shareholder’s wishes.”

The full 2010 schedule is as follows: