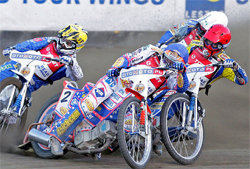 The series for the individual world championship, the FIM Speedway Grand Prix series (SGP), will consist of 11 rounds, with Polish track Torun and Croatian track Gorican, making their debuts on June 19 and August 28respectively.

The city of Gorzow, situated in north west Poland, is also a 2010 debutant, and will host the first round of the team world championship FIM Speedway World Cup (SWC) on July 24.

The famous Vojens Speedway Centre in Denmark will stage the SWC Race Off and Final on July 29th and 31st.

The calendar is detailed below: