Sadler to drive Ford for Petty at Talladega

Sadler to drive Ford for Petty at Talladega 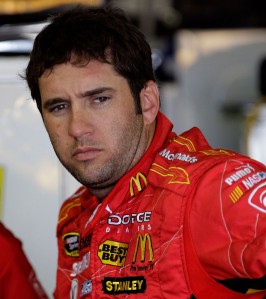 Elliott Sadler will make a one-off appearance aboard a Richard Petty Motorsports Ford at Talladega ... while his three team-mates remain in Dodges

Elliott Sadler will campaign a Ford Fusion for Richard Petty Motorsports at Talladega Superspeedway for this weekend’s AMP Energy 500.

In an interesting scenario that could only ever happen in NASCAR, Sadler will switch to Ford while his three RPM team-mates Kasey Kahne, AJ Allmendinger and Reed Sorenson will remain in their Dodge machinery.

Richard Petty Motorsports, majority owned by billionaire businessman George Gillett, announced previously that it would switch to Fords from next season.

Sadler is well accustomed to Fords, having raced for both the Wood Brothers and Yates Racing previously, with all seven of his pole positions and all three of his Sprint Cup race wins all coming with the Blue Oval brand.

Sadler will revert to Dodge equipment for the final three races of the season in Texas, Phoenix and Homestead.

“Richard Petty Motorsports is working with Ford Racing as we get ready to make the full-time switch at Daytona in 2010,” said Sadler.

“Since this is the final restrictor plate race of the season, we made the decision to run a Ford to get some work done in advance. This will be our first time to practice and work on a Fusion under real race conditions.

“It should help us get ready to make a strong showing at Daytona and put us in the best position to start next season.

“I’ll be back in a Dodge at Texas, Phoenix and Homestead, but since it’s important to start a season off on the right foot we thought we’d try to get a head start.”

The last time a Petty-owned team (Petty Enterprises) fielded a Ford Sprint Cup Series entry was April 14, 1985 in the TransSouth 500 at Darlington Raceway (Darlington, S.C.). Morgan Shepherd drove the No.1 entry to an 18th-place finish.

In other Ford NASCAR news, the company’s new FR9 engine will make its debut at Talladega aboard the Roush Fenway Racing entries of Matt Kenseth and David Ragan.