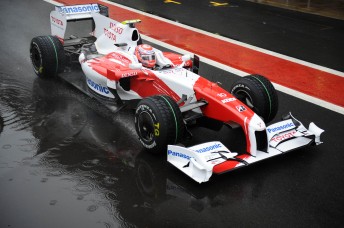 Tim Glock will be replaced again by Kumai Kobayashi, above, after he made his F1 debut with the Toyota team at Brazil

Timo Glock will miss the final round of the Formula 1 World Championship as he continues to recover from a cracked vertebra and cut leg in an accident during qualifying for the Japanese Grand Prix earlier this month.

The Panasonic Toyota Racing have replaced the German with Kamui Kobayashi, who will race with the team for the second time at the inaugural Abu Dhabi Grand Prix.

Kobayashi, 23, made his Grand Prix debut in Brazil with Toyota, where he qualified 11th and finished an erratic ninth. While his performance was on occasions ‘unpredictable’ he did impressive with genuine raw speed on debut.

Toyota Racing President John Howett said in a statement that he was happy for Kobayashi to be Glock’s substitute while he continues to recover.

“We feel genuinely sorry for Timo that his season, which has included two impressive podium finishes, is ending in this way,” he said.

“Having discussed the medical advice with Timo and his management, the team has decided to take no risk and to put Kamui in the car. Kamui performed well in Brazil in difficult circumstances so we are happy to ask him to once again deputise.”

The final round of the world title starts this Friday at the brand-new Abu Dhabi facility.