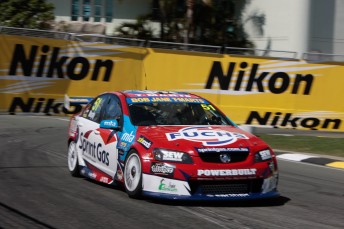 Tasman Motorsport's RECs are available for sale, but expect the Kiwi-owned team to keep one in play next year

This news, however, may not mean that the New Zealand-owned team is getting out of the V8 Supercar game altogether. The team is likely to end up just selling one of its RECs, and Speedcafe understands that a deal with Tony D’Alberto Racing has been agreed (but not signed) for the #3 entry.

One possible outcome for the team that has been mentioned in the V8 paddock is a four-car alliance with Britek Motorsport’s two RECs, Paul Cruickshank Racing’s REC and the Tasman entry.

Miles was recently re-elected onto the V8 Supercar Board as an advisor, indicating that his stake in the series is not about to be sold off.

Miles told Speedcafe that there’s no firm decision yet on which way the team will move forward.

“It could mean that we end up selling everything, or end up partnering up to make a four-car team,” he said.

“Right now, I don’t have anything done but I’m hoping by the end of the week I’ll be in a position where I have made a commitment one way or another.

“At the moment, nothing is done, but the way I’ve approached this is so I can do something if something comes out of it.”

As reported by Motorsport eNews, Sprint Gas Racing’s Greg Murphy is set to switch to Supercheap Auto Racing next year.