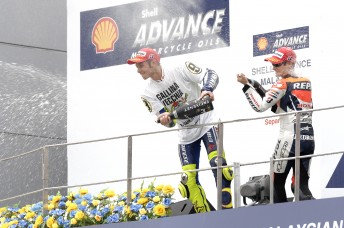 Rossi celebrates on the podium after sealing his ninth motorcycle title

Stoner crushed the field in his second-successive win, finishing an astounding 14.666s ahead of Dani Pedrosa in wet conditions.

But it was Rossi’s championship that stole the headlines, and he celebrated in his typical flamboyant style, displaying a chicken dressed in the Italian’s blue and yellow colours.

It was Rossi’s ninth world title and seventh in the premier class.

While Stoner raced away at the front, the Repsol Honda team-mates of Pedrosa and Andrea Dovizioso diced for second spot, but disaster struck Dovizioso on lap 14 when he succumbed to the wet conditions and slid off, allowing Rossi to move up to third.

Fourth place went to title challenger Jorge Lorenzo, who was forced to start from the back having failed to grid up in time.