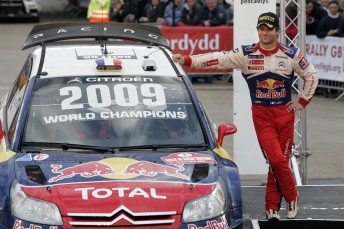 Citroen driver Sébastien Loeb has wrapped-up his sixth straight World Rally Championship title with his 54th career victory at the final round of this year’s series, the Rally GB in Wales.

The one-point championship victory came after more than 4040km of flat out driving across the globe, including September’s Repco Rally Australia on the far north coast of NSW.

Loeb had a great start to the year winning the first five events, before a seven month winless streak when Hirvonen and Ford hit back. The Finn took the lead in the driver’s title, but back-to-back victories in Spain and Great Britain brought him the Citroen driver the title by the narrowest of margins.

“The start was good, with five victories, but then we went into a time where nothing was going right,” said Loeb.

“I made a mistake in Greece and we broke the cross-member in Poland. Then we had the penalty in Australia. But in Australia I also found my confidence again. I knew we could win. But this has been first time we have arrived at the last race of the year knowing we had to win it to win the Championship. That was another type of pressure. When you arrive like that on the last rally and you know that everything will be decided here it makes it a bit special.”

The destiny of the 2009 title came down to the final 79.84km of competition in this 12th and final round. After several days of heavy rain, the gravel forest tracks in the Vale of Neath, near Cardiff, were treacherously muddy but the Ford driver threw caution to the wind in his attempt to overhaul the Frenchman and claim the title.

The 29-year-old edged closer to Loeb by winning the opening Port Talbot special stage and then gave himself a real chance by slashing more than 11sec from Loeb’s advantage in the classic Rheola test. With just a repeat pass through those two stages remaining, the deficit was down to only 18.2sec. Hirvonen was again quicker than his rival through the early sections of the 17.41km Port Talbot test, before his chances evaporated shortly before the midpoint.

“The car landed after a jump and the left pin holding the bonnet came loose,” said Hirvonen.

“The bonnet began to flap in the wind but the hinge on the right stayed attached. I couldn’t see a thing and stopped to rip off the bonnet. It was such bad luck. I’m frustrated to lose by so little, but happy I was able to fight for the title with a six-time world champion until one stage from the end of the season.”

Hirvonen hung on by just one second over Dani Sordo to secure second place. Petter Solberg finished 21 seconds further back in fourth.