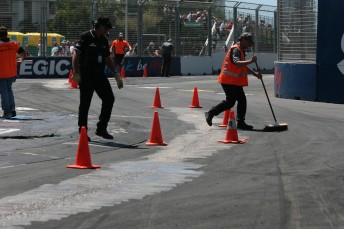 Part of the turn one chicane at the SuperGP has been resurfaced after the track started to break up in yesterday’s V8 Supercar races.

The hot conditions, as well as the constant on-track action contributed to the surface breaking up.

Officials laid down track glue (epoxy) on the affected part of the track before Part B of yesterday’s race as a temporary solution.

Valvoline driver Lee Holdsworth was involved in a turn one shunt in the first segment of yesterday’s race and told Speedcafe that he could see the surface deteriorating during the race.

“I felt that in Part B, the track was a bit better than in Part A,” he said.

“You could see where it was breaking up. It started getting pretty slippery. It was getting worse in Part A.”

Officials hope that further overnight work will ensure the surface lasts the distance.