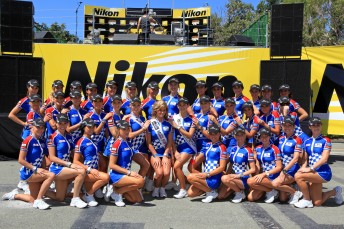 The 38 entrants in the TW Steel Miss SuperGP competition

The 20-year-old Surfers Paradise was the stand-out contestant amongst the 38 finalists. Sudholz took home over $25,000 in cash and prizes including a $6000 promotional contact, a diamond encrusted TW Steel watch and over $3600 in jewellery specially designed by Wallace Bishop. She will also feature on the cover of the 2011 Miss SuperGP Calendar.

Sudholz was born in Moora and raised in Badgingarra on her parent’s farm. She moved to the Gold Coast a year ago and works as a personal trainer, part time retail assistant and a freelance model. Her interests include boxing, wakeboarding, horse riding and V8 Supercars.