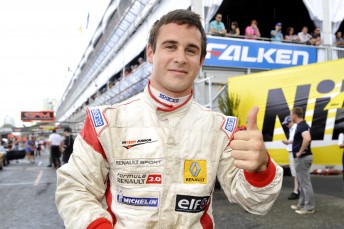 Support racing at the Nikon SuperGP gave fans plenty of thrills and spills.

The final round of the Australian Ford Ford Championship was taken out by Ash Walsh. The former Formula Renault driver finished the weekend with a fourth, third and first in the three races.

The second race boarded on farcical, when only two actual racing laps were completed due to a number of Safety Car periods.

New Zealander Mitch Evans finished second overall ahead of Richie Stanaway. Stanaway’s final result may come under the eye of the stewards, though, after a dramatic dice with Scott Pye late in the last race. The pair clanged wheels no less than three times in a short space of time, with Stanaway turning Pye around to finish him off.

The championship was wrapped up last round at Phillip Island by Sonic Motor Racing Services driver Nick Percat.

Stokell reclaimed the series lead with his win after an up and down weekend for title combatant and team-mate Grant Denyer. The final two rounds of the MINI Series will be at Barbagallo and Homebsuh.

In the Aussie Racing Cars, Kyle Clews was a surprise round winner after a final race melee put weekend dominator David Lawrence into the wall and out of contention.

The final round of the Aussie Racing Car Series will be held at Phillip Island in November as a support category to the Australian Superbikes.