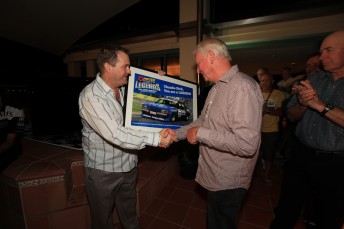 Speedcafe.com.au was launched last night in front of some of Australian motor sport greats at a special function at Surfers Paradise last night.

Queensland sports minister Phil Reeves was also present for the function at the Speedcafe House, located on the circuit at Main Beach Parade.

The Speedcafe House has played host to many number of corporate guests all through the weekend.

The Australian legends, completing demonstration runs in famous Australian touring cars, were also presented with one-off framed posters of the cars that they are competing in this weekend as part of the Pirtek Australian Legends.

The posters were a ‘thank you’ for the effort they had gone to this weekend as a replacement category for the fallen A1 Grand Prix category.