Rossi ready to wrap up title

Rossi ready to wrap up title 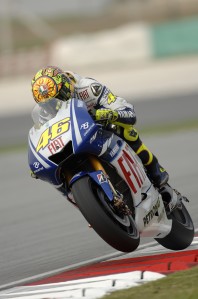 Valentino Rossi will start the Malaysian Grand Prix from pole

The Italian can wrap up the the 2009 MotoGP World Championship at the Sepang circuit, depending on where team-mate Jorge Lorenzo finishes.

Australian rider casey Stoner, who won the race at Sepang in 2007, will head up the second row after lapping almost a full second slower than Rossi.

Loris Capirossi secured fifth spot on the grid on his Suzuki GSV-R.

Chris Vermeulen will start the race 14th on his Suzuki.