Coulthard out of final race after start crash

Coulthard out of final race after start crash 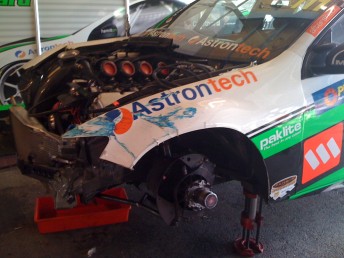 Fabian Coulthard gets an early rest after his clash with Cameron McConville at the start of the Race 20, Part A

Fabian Coulthard will take no further part in this weekend’s V8 Supercar races after his Race 20, Part A crash at the start of the race.

Coulthard’s Wilson Security Racing Falcon FG was involved in a clash with Cameron McConville, sending the pair into the concrete wall at high speed.

Wilson Security Racing team boss Paul Cruickshank told Speedcafe that he was disappointed with the amount of damage to the #111 car.

“It’s got into the cross member so we need to strip it out,” Cruickshank said.

“There’s a bit of damage down the rear but all the sub-assembly stuff, the uprights, calipers, all the front ducting … It has given it a fair old go.”

Cruickshank said that the plan from here is to strip the car immediately and have it ready to be placed on the jig tomorrow.

“We’ll strip it here, take it back to the workshop and strip it out so we can put it on the jig tomorrow. We’ll get it going for Phillip Island, no problem.

“We going to use this weekend as a chance to turn around our fortunes from the past three rounds but it’s proving a bit more difficult than we thought. At the start of the year, we were going so strong and we couldn’t do anything wrong. No, it seems we can’t do anything right.”

McConville’s WOW Racing Commodore VE will be repaired in time for the second part of Race 20, scheduled to start at 3.05pm.