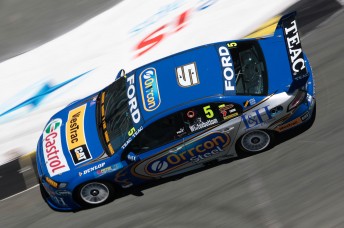 Mark Winterbottom has backed up his Friday qualifying speed by claiming pole position for today’s first V8 Supercar race at the Nikon SuperGP at Surfers Paradise.

The Orrcon Ford Performance Racing driver scorched around the 4.4km circuit in 1m50.9325s, beating the Holden Racing Team’s Garth Tander by over 0.2s.

Jamie Whincup will line up third, ahead of an impressive Jason Bright, Will Davison, Paul Dumbrell and Craig Lowndes.

Winterbottom’s team-mate Steven Richards will start eighth after tagging the wall and losing time, but that was nothing compared to James Courtney’s clang at the second chicane. His Jim Beam Racing Falcon suffered some cosmetic damage but the car will be OK for Race 1.

Courtney would have started the race 10th on the grid, however, Russell Ingall skipped over one of the chicanes on the back straight and was sent to the tail of the top 10. Ingall too hot into the chicane and was penalised accordingly.