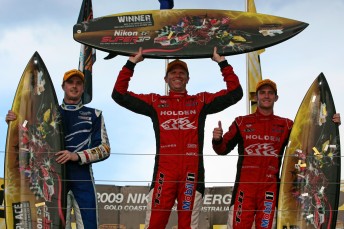 From left, Mark Winterbottom, Garth Tander and Will Davison on the SuperGP podium

Garth Tander won the start of Race 19, Part B, and that was the story of the event.

“It’s good when you get into the lead at the start. I meant to do that in the first race …

“The guys made a fantastic pitstop, we made ground in the pit sequence and managed to control the race to the end.”

Second place went to Part A winner Mark Winterbottom, ending Race 19 on equal points with Tander, however, Tander is declared the race winner, thanks to his victory in Part B. While Winterbottom’s race win isn’t an ‘official’ race victory, it was the first time that an FPR Falcon has won a race in 2009.

“We’ve had a really good day – qualifying on pole and winning Race 1. Unfortunately, Garth has been pretty quick as well,” he said.

“The result is good for the guys. We probably haven’t got the results that we should of.”

Tander’s team-mate and title challenger Will Davison was third, holding off a late-challenge from TeamVodafone’s Craig Lowndes. Davison (surrefering from an upset stomach) now sits 41 points behind Jamie Whincup in the title chase.

The race was certainly a lot tamer than the incident-filled Part A, with no Safety Car periods.

Greg Murphy and Steven Richards gained one place each, taking fifth and sixth after Shane van Gisbergen skipped a chicane and lost his spots at the same moment.

Whincup gained five spots and finished eighth, setting the fastest lap of the race on the way.

Rick Kelly and Jason Bargwanna wrapped up the top 10.

Michael Caruso was one of the stars of the race, coming from 25th on the grid to finish . It was a great spirit lifter for the Garry Rogers Motorsport crew who had to work feverishly to repair both its cars after their incident in the first race (see separate story). Team-mate Lee Holdsworth made it up to 14th place.

Russell Ingall had gearbox problems, making him the only retirement of the race.