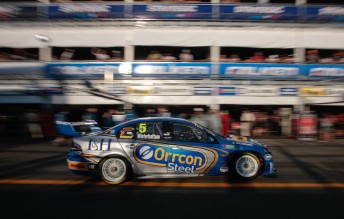 Mark Winterbottom has snatched pole position for the first of four V8 Supercar races at this weekend’s Nikon SuperGP on the Gold Coast.

Despite being struck down by tonsillitis earlier in the week, ‘Frosty’ placed his Orrcon FPR Falcon on provisional pole, 0.2s ahead of reigning class Champion Jamie Whincup and Supercheap Auto driver Russell Ingall.

Winterbottom said that, illness aside, the speed of his factory Falcon is there.

“I feel alright at the moment, just a bit more tired than I’d usually be,” he said.

“Putting the car where we did is definitely a good injection for tomorrow.”

Whincup had an up and down day, hitting the wall in the second practice session before bouncing back to take second at the end of qualifying.

“They’ve resurfaced the first chicane and when you go through there the car feels great, but when you get to the second chicane on the old surface, there’s a massive difference,” he said.

“It was my mistake. I was pushing – pushing too hard.

“Full credit to the mechanics though. The ripped the front-end out, completely changed the sides and the car in qualifying was as good as brand-new.

“I had a good run in that session. Qualifying here is unbelievable, tore some mirrors off, the whole lot. It’s one of the better sessions of the year for sure.”

Ingall was third, despite a later clash with Fujitsu Racing’s Jason Bright. As always, Ingall was animated about the incident.

“There were a few things going through my mind (while the cars were placed nose to nose against the wall), The Enforcer said.

“I thought about getting out and giving him a hand to find reverse. I was going to give him a clip around the ear while I was there as well!

“We’ll sort it out. What goes around comes around. I was a bit casual coming into this meeting, so I needed something to fire me up. I’ll get going tomorrow …”

The top 10 shootout will be held tomorrow morning, followed by two 150km races.