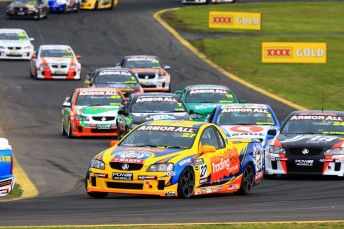 The Yokohama V8 Utes Series has been named as the main support class at next year’s Clipsal 500 in Adelaide and will use the honour to hold a special ‘V8 Utes Legends’ race at the event.

Selected drivers from the Australian racing scene, including past V8 Ute stars, current V8 drivers and other racing celebrities will be invited to take part in a non-championship two-driver race.

The popular Ute class was founded in 2001, making its debut at the Clipsal 500 with just nine cars in its field. Ten years on, the category has turned into one of the most professionally run support categories in Australia, including a recent expansion into New Zealand.

Category administrator Craig Denyer told Speedcafe that plans are underway for a raft of celebrity drivers.

“We’re celebrating our 10th anniversary at the Clipsal and the 10th year of the category, we thought it would be special to have a format based on 10 years of legends.

“It will be more than just people from the V8 Ute category. There’ll be some former Australian Touring Car legends, former V8 Ute legends, possible some music legends like Adam Brand or James Morrison, maybe Troy Bayliss or Wayne Gardner as well.

“All the drivers aren’t set in stone just yet, but that will come into place over the next few months.”

Denyer is proud to have his class honoured as the main support class to what is arguably Australia’s most popular touring car event.

“It’s a great event, it’s always one of the better events of the year,” he said.

“We debuted there in 2001 with nine cars so we’ve got a lot of history at the track. It’s where the class started and where we first made our mark so we always wanted to do something special there.”