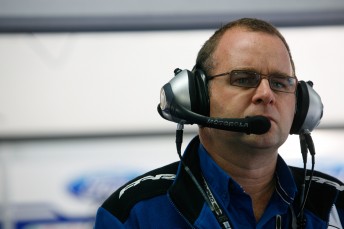 Tim Edwards retains his place on the V8 board, joined by new members Roland Dane and Ross Stone

A new look V8 Supercar board was confirmed on Wednesday afternoon at V8SA’s board meeting.

Former board members Jason Bright and Larry Perkins lost their places in the mix.

Edwards, Morris, Stone and Dane will be joined on the eight man board by James Erskin and Tony Cochrane, representing SEL, and Mark Skaife and Roger Cook remain the independent members.

Brad Jones (Brad Jones Racing) and Tim Miles (Tasman Motorsport) secured places as alternate members. Jones and Miles will oversee each board meeting, and fill in for a member if there is an absence.

Edwards’ relection will see him remain on the board for a further two years.

“It’s nice to have been re-elected, obviously people didn’t think I’d done too bad a job over the past couple of years,” he told speedcafe.com.au.

“It’s a petty thankless task. You go home at night and you have to take the knifes out of your back sometimes, but for me, it’s encouraging that I was re-elected.”

The FPR team principal also said that he’s very pleased with the direction the sport is heading.

“V8s is going places, it’s so healthy at the moment, even though the economy has been in crisis, V8 Supercars is going gangbusters,” he said.

“And it’s great to be a part of that. With events such as Townsville and Homebush coming along, I’m really enjoying it.”