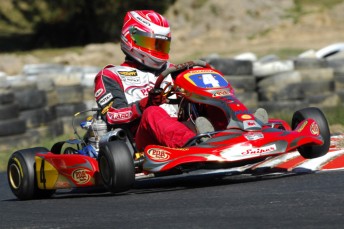 Despite there still being one round remaining in the 2009 Australian CIK Championship, to be held this weekend at Ipswich in Queensland, points leader Hayden McBride is already excited about next year’s series.

McBride was one of the first drivers to confirm his interest for this year’s series and confirmed to speedcafe.com.au that he will be suiting up again for the 2010 series, hopefully as the defending champion.

“The CIK Championship has traditionally been considered as the pinnacle of Australian karting and I’m really excited about seeing the series expand in 2010,” said McBride.

“This year has certainly been a learning year for everyone involved, the organisers have made some changes to the regulations to make it more exciting for us as driver, which in turn has made the racing more exciting and helping to attract more competitors.

“We’ve got some good steerers coming to be a part of the final round and I’m sure after they experience the power and stickier tyres that they’ll be back for more in 2010.

“Judging from what I’ve heard around the traps I’d be confident of saying that we should have around 20 drivers competing in 2010. I’m really looking forward to it.”

Entering this weekend’s final round of the Australian CIK Championship, where there will be no less than $6,500 cash and prizes up for grabs courtesy of Defence Industries, manufacturers of high quality security roller shutters, and St George Kart Centre, McBride holds a slender lead at the top of the points table.