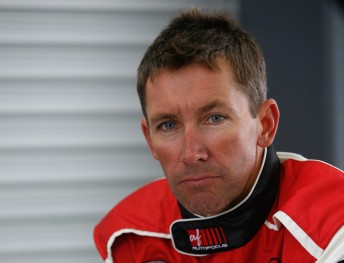 Troy Bayliss is a strong chance of securing a V8 Supercar Championship Series seat with Paul Morris Motorsport in 2010.

The three-time World Superbike champion made his V8 Supercar debut with PMM-supported team Triple F Racing at Phillip Island and Bathurst, and while his results and outright speed didn’t raise many eyebrows, the value – and potential – of the 40 year old has not gone unnoticed by Paul Morris.

Morris is a keen supporter of Bayliss’s quest to make the step up to the V8 Supercar series and he told speedcafe.com.au that Bayliss and his team’s current driver Tim Slade are the two men in the frame to partner Russell Ingall in the Supercheap Auto-backed team next year.

“If we can make a deal stack up around him, I’ll make a go of it,” Morris said.

“One of my preferences is to keep Tim, but at the end of the day, it’s about getting right sponsorship around it. That’s the commercial reality.

Bayliss has long held an ambition to break into the V8 class, testing a Triple Eight Race Engineering Falcon at Queensland Raceway earlier this year. As it turns out, PMM will campaign T8-built Commodores next year, and furthermore, Bayliss was spotted speaking to Holden Motorsport manager Simon McNamara at length at last weekend’s MotoGP event at Phillip Island.

While the desire for him to race V8s is there, Bayliss’s track performances in the endurance races were a struggle. Mechanical gremlins restricted his learning curve at Phillip Island, and limited laps at Bathurst resulted in him having a ‘rookie’ crash on lap 77.

While it may have been a debut to forget, Morris commended him for the job he produced in difficult circumstances.

“He put his head on the chopping block and went to Bathurst with no miles. For me, it shows that he’s got enough determination and guts to be able to be successful at it.

“All you have to do is look at his pedigree to know that once he gets his head around it, he’ll be competitive.

“It’s a hard category to get miles in. There’s a lot of guys that have come in to drive these cars have had a lot more race car experience than him so I think the job he did, given the amount of miles he has done, shows that he can do the job if he’s given the opportunity.”