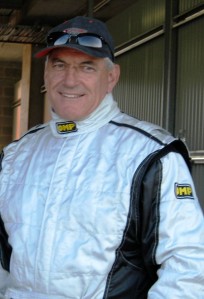 Most of the attention of Touring Car racing in the early 1980s was grabbed by the likes of Peter Brock, Dick Johnson and Allan Moffat. However, there was a group of outstanding privateers led by Peter McLeod that came away with some impressive silverware along the way.

A look back in the Bathurst championship books shows McLeod as the “other” driver in the car with Peter Brock and David Parsons in the 1987 Bathurst 1000 winning Holden Commodore. However, it was his performances behind the wheel of a rapid Mazda RX-7 in Group C racing that people remember. Moffat had the factory support and fantastic corporate backing. McLeod had the support of Slick 50 and a clever group of engineers and mechanics which really made his bright yellow RX-7 fly.

After standing on the front guard of his mother’s Morris Minor to watch Jack Brabham race at Warwick Farm in the early 1960s, the Mazda dealer from Wollongong was convinced to get a racing license at the age of 32 in 1980 to help drive sales of the newly released RX-7. To make Bathurst that year he had to get enough racing kilometres to get the necessary upgrades to his racing license. So between March and late September he competed in no less than 37 races on the eastern seaboard. He started 33rd at Bathurst, but mechanical problems throughout the week continued through to the race.

To make sure he had a better chance in 1981 he drove as many Touring Car rounds as he could and scored podium results in the AMSCAR Series at Amaroo and was named ‘Most Improved Driver’ by the ARDC. By 1982 he started to perform with an eighth placing at Bathurst. Then in 1983 he got the backing of Slick 50 and support from Mazda to build a brand-new car for the endurance championship. He took fifth outright at Bathurst and other podium results earned him the long distance championship. By 1984 his team had developed the entire package including a special venturi port on the 13B rotary engine to a staggering 330bhp, plus a Wally Storey developed Watts-Link rear and McLeod finished third in the Australian Touring Car title.

The end of 1984 spelt the end of the Group C era, and in the process the end of the RX-7 and McLeod was one of the victims. The start of 1985 was one of his career highlights when Mazda rewarded McLeod by inviting him to be part of Allan Moffat’s Daytona 24-Hour assault with Moffat, Gregg Hansford and Kevin Bartlett.

Over the coming years he built cars and had glimpses of success. His biggest single achievement was winning Bathurst in 1987 with Peter Brock and Davis Parsons. However by the end of 1988 he had sold everything and focussed on working in the motor trade. He was bitten by the motor sports bug once again with the advent of the Bathurst 12-Hour in the early 1990s. A Citroen dealer at the time, he thought it was a great way to promote the brand. McLeod put together a good package of three cars and took class honours ahead of the Peugeot squad from France with Peter Brock at the helm.

With his son Ryan (now the Managing Director of Racer Industries), they took on the ‘Great Race’ in 1994. However, the Commodore broke the gearbox on the starting grid and the race was done. The father and son duo pressed on for another year, but never had great success and McLeod again returned to the motor trade.

2009 marked McLeod’s return to the Mountain with his sons Ryan and Gerard in a Holden Astra Diesel at the Bathurst 12-Hour. A year’s experience under their belt, the McLeod family is looking forward to returning in 2010 and creating their own little piece of history at Bathurst.

Nowadays semi-retired McLeod still has a mechanical workshop business, City Autocare, in Unanderra, specialising in Peugeot and Citroen service and repairs. He is also highly renowned for rebuilding classic Citroen and Massarati cars, plus has a used car lot. He is restoring the Barry Jones RX-7 from the Group C days and is also working to restore the Slick 50 Mazda. Plus he is building the most radical Series I RX-7 sports sedan which has a 20B motor producing 500bhp, sequential 6-speed gearbox, differential with multiple ratios and Ohlin Racing shocks all in a package less than 800kg!