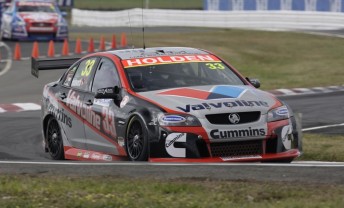 Lee Holdsworth will be a Garry Rogers Motorsport driver in 2010, ending speculation that that 26-year-old would leave the Valvoline-backed team a year before his driver contract expires.

Despite tempting offers from rival V8 Supercar teams, Holdsworth told speedcafe.com.au that he will honour the contract and see out his fifth-consecutive season with the Melbourne-based outfit.

“Garry has been very good to me, I’m in a contract at the moment and I want to stay loyal to him,” he said.

“I want to focus on my racing. I don’t want to have the distractions of the media and the speculation on what I’m doing. I want to clear that up and I want everyone to know that I’m 100 percent committed to Garry.”

“There were a lot of phone calls asking what I was doing next year,” he admitted.

“I told everyone that I’m in a contract at the moment and that hasn’t changed. It was nice to know that there was a lot of interest out there and when it comes to decision time next year, I’m hoping there’ll still be a few options, but at the moment, GRM is moving forward and as long as we keep moving forward, I’ll be happy to stay at GRM.”

GRM has been a regular top 10 team over the past two seasons – culminating in a podium finish for Holdsworth and his team-mate Michael Caruso at Bathurst two weeks ago. And since Holdsworth has been at GRM, the team has taken two round/race victories. Now, he says its time to move from the top 10 to consistent podium threats.

“People expect us to be in the top 10 now. Previous to that, it was a big thing for us to get into the top 10. It’s amazing how quick you raise your expectations,” he said.

“The team’s budget hasn’t changed much in the last couple of years but the key has been that we’ve kept some good guys on board and that’s been the key to moving forward – developing good guys and developing a good bond.

“I’ve had a different engineer work on my car every year I’ve been with the team, but I’ve got a good thing going with my current engineer Chris Harris. We work together well and I hope I can keep him for next year.

Holdsworth will revert back to his regular Commodore VE chassis for the rest of the season after joining Michael Caruso in his car for the Phillip Island and Bathurst endurance races. This means that Caruso will campaign the new red livery, while Holdsworth will sport the team’s silver hues for the remainder of 2009.