Relief for Kozlinski in World Championship

Relief for Kozlinski in World Championship 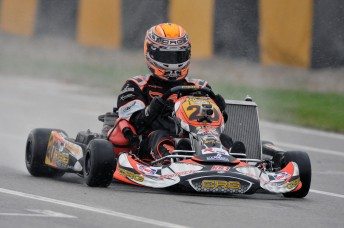 French driver Arnaud Kozlinski aboard his Maxter-powered CRG in Macau

“What a relief!” were the first words from French driver Arnaud Kozlinski when he broke through for his maiden World Karting Championship in Macau on the weekend.

Having finished on the second step of the World Championship podium in 2003 and 2004 Kozlinski appeared on track to secure the top spot on the podium last year until he encountered motor problems. However, 2009 is the year of “Koko”.

“In 2008 I was leading the race until I had motor problems, just as I had one month previously when I was about to be crowned European Champion. Emotionally that was all very difficult! But I was determined to return even stronger and I dedicate this victory to everybody who has supported me, particularly my parents,” said Kozlinski, who drove a Maxter-powered CRG to the win.

“When I saw the first spots of rain early in the final, I said to myself the race is going to be long and difficult. There would be no room for error. I was lucky to have Aaro Vainio in front of me. He was very quick and in some respect, he showed me the tricky places. Both of us had an opportunity to pull away from those behind us.

“Then I had an opportunity to take advantage of what I had learned and pass him. The conditions were by now increasingly difficult and then the Clerk of the Course brought out the red flag. It is true that conditions by now had become even more difficult. But still I did not realise that I really was World Champion.”

Finishing second behind Kozlinski in the final was rising Finnish star Aaro Vainio, who has been the revelation of the year. After turning 16 the week prior to the Championships Vainio led for a significant period of time aboard his Maxter-powered Maranello kart before he was passed by Kozlinski in the tricky conditions.