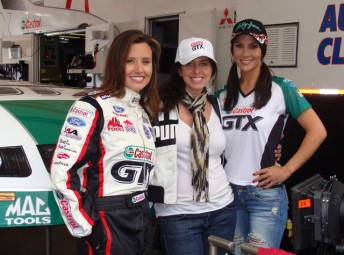 The video footage for Krista Marie’s new single ‘Tomboy’ was shot at zMax Dragway ahead of the NHRA Carolinas Nationals this year, and in addition to the pit footage also includes race footage from her historic win at the Mac Tools U.S. Nationals.

“It was exciting to be a part of the Tomboy music video,” said Force-Hood.

“Krista Marie was awesome to work with and she did a great job incorporating our Castrol GTX team into the video.

“I met Krista Marie earlier this season and we really hit it off. I am honored she would include me in her new video and I know it will be big hit.

“I love the song and the music video turned out great. I have watched it over and over and everyone on the team thinks it is great.”

Force-Hood is currently fighting it out for the Funny Car championship as the series heads into the Countdown, with the leading contender now facing a battle to defend her points-leader status with two rounds remaining in the chase after a first round loss last week.

The Tomboy music video can be found here http://www.cmt.com/videos/misc/443546/krista-marie-tomboy.jhtml and more